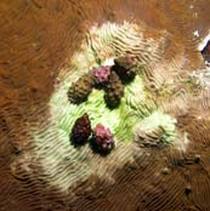 There are a few coral-eating snails commonly appearing in aquariums. Most prey on soft corals.  Depending on the snail species, number of snails and the corals involved, predation can range in severity from hardly noticeable to devastating.

The most common corallivorous snails your likely to encounter are Drupella, Heliacus and Coralliophila

Heliacus - Also known as Box snails. These snails are notorious for feeding on Zoanthids.  They have a classic shaped shell that is round at the base and twists upward into a point. Usually smaller than a pea. Tan and brown colouration alternate within the striations of the shell, giving it a rather beautiful appearance. They may or may not become a problem. The Box Snails are guilty of consuming many different types of polyps within the Zoanthus, Palythoa and Protopalythoa genera. Many times the snail will be found within the colony itself, where they puncture the base of the polyp, and feed upon its tissue and fluids. The polyp is then basically left as an empty shell, which quickly falls off of the rock and decomposes.

Drupella cornus, commonly known as the horn drupe has a shell size of an adult between 28 - 40 mm. This whitish shell shows four rows of spiny, pointed nodules with numerous smaller spines between. They lay benthic egg capsules, which hatch into free-swimming planktonic larvae. This particular  snail is attracted to Montipora corals

Coralliophila abbreviata is known to affect corals in the wild and within aquaria, this particular species is commonly associated with Montastraea sp. and Acropora sp.

Quarantine of the coral and manual removal of the snails is the best treatment (if the snails become a problem). 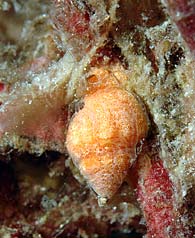 See  http://www.chucksaddiction.com/Hitchsnails.html for more on snails which are harmful or harmless to your aquarium