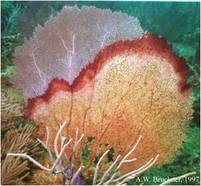 This disease falls under the broad spectrum of cyanobacterial overgrowth forming a mat over the aquarium floor and often the corals themselves. It varys in colour from red, black to blue-green. There are strong similarities between this disease morphology and that of the cyanobacterial mat of Black Band Disease within wild coral populations (Weil, 2004; Weil & Croquer, 2009). 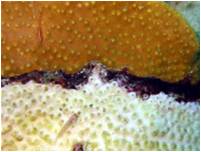 This disease is most commonly associated with high levels of organic nutrients within the aquarium, which in turn may be influenced by changes in light levels. Despite the common name of this disease, the causal agent is not actually an alga at all, but a consortium of cyanobacteria (photosynthetic filamentous bacteria). 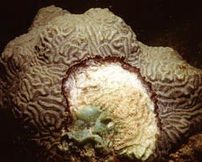 Red Slime Algae is reported to be treatable by commercial products such as Ultralife Red Slime Remover, Boyd Chemi-Clean, and Blue Life Red Slime Control (Brang, 2010). However, many of these diseases are reported as a sign of poor water quality, so most aquarists propose reassessment and improvement of aquarium water quality (reducing levels of nitrate and phosphate and monitoring light levels and improving flow) as the most effective treatment. Because the cyanobacteria are photosynthetic, masking the band with putty or plasticine has been reported to be effective in the wild.